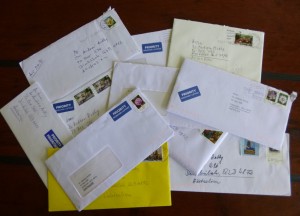 Although the Second World War ended 71 years ago, there are still participants with stories to tell. In mid-October 2015 we began to send out a large batch of letters to former Luftwaffe airmen, asking if they had any memories or stories to share. The response has been incredibly heartening, and we are grateful that so many of these old gentlemen responded so positively.

Amongst those who have replied, several were unit leaders and aces. One flew the Arado 234 in the final months of the war, and another participated in Unternehmen Gisela, the Luftwaffe night fighter arm’s last-ditch intruder raid over the United Kingdom on the night of 3/4 March 1945. There is also a fighter pilot who was operational in North Africa, engaging British and American fighters and bombers as the Allies gained ascendency in the desert skies in the early months of 1943. One man was a Bf 110 crewman when the Luftwaffe dominated the Russian skies in 1942, and then found himself serving as a Sturm pilot against American bomber formations in late-1944. Another earned the Ritterkreuz as an Eastern Front bomber pilot. So these men are from a wide range of units, serving on all fighting fronts.

Veteran letters received in 2015 and 2016. Thanks to all those who have replied!

Recently, a former Torpedoflieger shared some thoughts and memories about the activities of his branch of the Luftwaffe, including revealing comments about the unintentional overclaiming of Allied ships: “Nevertheless, many sinkings were reported. These were not to be found in the Allied casualty lists after the war. What was the reason? In the Ju 88 with a four-man crew, while attacking only the pilot and the observer saw the targeted ship. The radio operator and gunner looked rearwards. After a 180 degree u-turn, those two saw the convoy for the first time. By the time the torpedoes reached their destination, our planes were more than five kilometres away from the attacked target. Each explosion of depth charges or even downed aircraft was then reported by several crews [as a ship hit].”

There are also stories from the final war days, for example from a Focke-Wulf 190 pilot: “At the end of April 1945 we were transferred to Berlin-Gatow to support the fighting in the city and to attack Russian positions and tanks. These really were kamikaze missions with many losses.”

Other stories involve them meeting with former adversaries, or in one case, with wartime rescuers from occupied territories. So many of these Luftwaffe airmen sought out former enemies after the war, leading to unexpected reunions in Germany or the United Kingdom, as old foes became friends in the post-war years.

Of course, given the passage of time, there has been some sad news, with family members replying in several cases to report the passing of their uncle, husband, father or father-in-law. However, even in those cases the relatives have been kind enough to provide memoirs, information, or stories they had been told.

We are very fortunate indeed to be able to exchange letters and emails with these men. It won’t be long before this is impossible, and that will be a sad day indeed. In the meantime, we are very grateful to these old gentlemen and their families for taking the time to correspond with us.